Posted at 13:34h in Uncategorized by admin 0 Comments
0 Likes
Share

FAR HILLS, N.J., Nov. 29, 2017 — Tom Maoli has been labeled by industry leaders and peers a “serial entrepreneur.” His proven 35-year track record of business success, plus his ability to seize a business opportunity and turn it into a successful enterprise is well documented. So, when Maoli, who recently as approached by WABC to start a radio show he thought long and hard and decided to add to his resume “Radio Personality” by hosting a business topic radio show on 770-WABC radio.

WABC radio host and entrepreneur Tom Maoli featured the Amazing Kreskin on his recent Sunday show, Go Big or Go Home. Now the flood gates have opened and some major personalities are jumping on the train of Maoli show, “Go Big or Go Home.” Last week, when the show featured Maoli with the Amazing Kreskin, one has to ask, “Was he revealing the secret to his success?” After all, Kreskin is renowned as mentalist and reader of thoughts. Does Maoli have that ability, too? 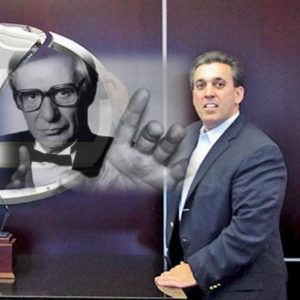 As it turns out, Maoli’s interview with Kreskin focused on getting into the mind of an entrepreneur and the attributes that have made both men highly successful in their careers. It seems successful people have certain character traits that drive them to persevere and succeed.

Both men employ what each describes as “theater of the mind,” an interesting term, since it was originally coined to describe early radio soap operas. In the case of Kreskin and Maoli, it refers to a positive state-of-mind, one that’s committed and singularly focused toward achieving a goal and then projecting that image out to an audience. With Kreskin, the audience is sitting in seats; with Maoli the audience is in a board room.

“Clear your mind, focus, and put your blinders on,” stated Maoli. Kreskin added, “You listen to your inner thoughts, and focus on them.”

Kreskin’s biography entails over 50 years as a mentalist. During that time, Kreskin has had a television series, his own board game by Milton Bradley, twenty published books, and a major motion picture inspired by his work, which starred Tom Hanks, and he has flown more than 3 million miles. In the 1970’s Kreskin headlined his own television series for five and a half seasons called, “The Amazing World of Kreskin,” which can now be viewed on www.hulu.com. In the 2010 movie, “Dinner for Schmucks,” the character played by Zach Galifianakis has as his hero and influence The Amazing Kreskin, which further exemplifies the wide scope of Kreskin’s exposure and attention. It is showcased with his record breaking number of appearances, which, in Kreskin’s estimation, number in the hundreds, on Johnny Carson, Regis Philbin, David Letterman and most recently Jimmy Fallon, Neil Cavuto and Howard Stern.

Through the years Kreskin has received worldwide recognition for extraordinary predictions, often dealing with international affairs and sports. On Late Night with Jimmy Fallon, Kreskin predicted the 2012 United States Presidential Election 18 months before Election Day. And, in 2015, a full year before the 2016 election, Kreskin predicted a Donald Trump victory. Maoli laughs, “I could have told you Trump would win.”

Maoli has been employing his “theater of the mind” approach his entire career, which includes real estate holdings throughout New Jersey and New York, an elite automotive dealership group, Celebrity Motorcar Company, and other investments. He has always balanced his business and entrepreneurial ventures with philanthropic giving and speaking to university students about tapping into their own “theater of the mind” approach to preparing for their future careers.

The show can be listened to here.